On Friday I come home to discover that someone had smashed the windshield of my car: 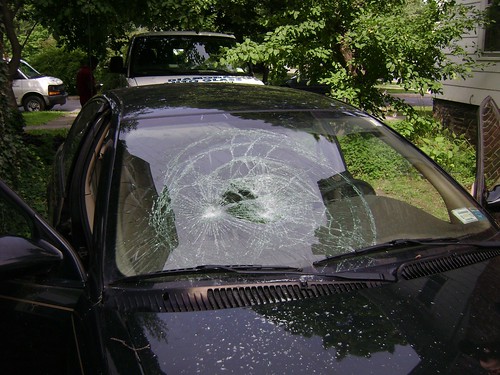 They had also smashed the windshield of my neighbor Pete's car: 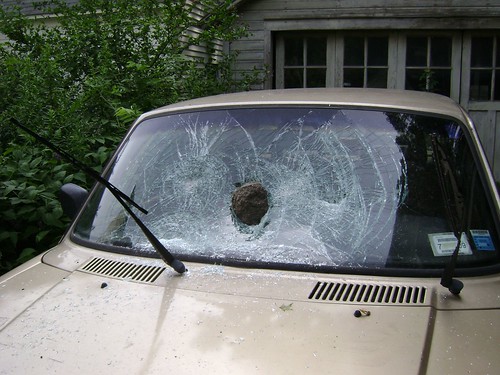 Note the rock still embedded in the glass.

The damage had apparently happened the night before, according to another neighbor, who had heard crashing sounds. I don't know how I missed seeing that when I left home in the morning.

No one had actually seen who did it. There wasn't much else to do but call the cops, call the insurance company, and call Diamond Auto Glass. Pete had also called the same place, though I didn't know it at the time. This led to a funny moment when both Calvin, who was supposed to fix Pete's car, and Alex, who was supposed to fix mine, showed up at the same address at almost the same time. They had me pull up my car next to Pete's, and the work probably went faster with both of them working than if either had been alone. 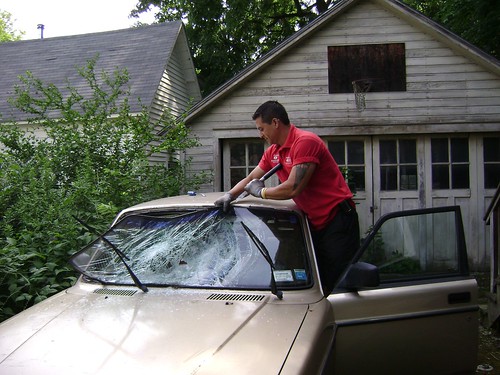 Here's Alex scraping off the gunk: 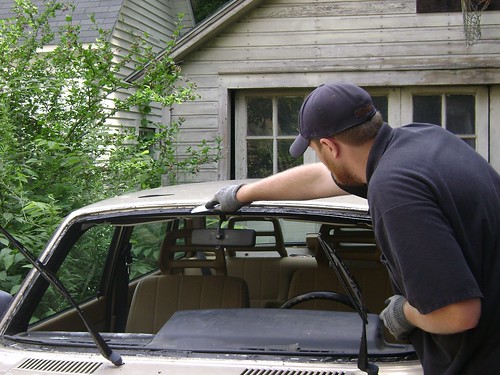 Older cars apparently use this stuff called butyl which is really sticky and hard to get off: 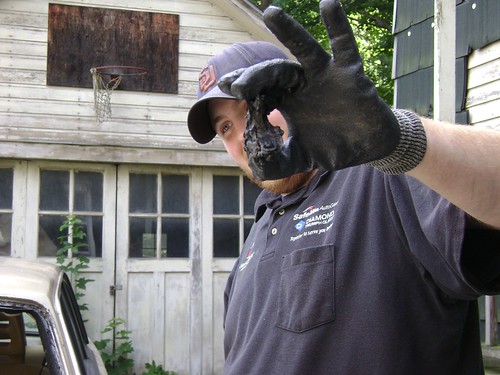 My windshield was easier to remove since it wasn't stuck on with that butyl gunk: 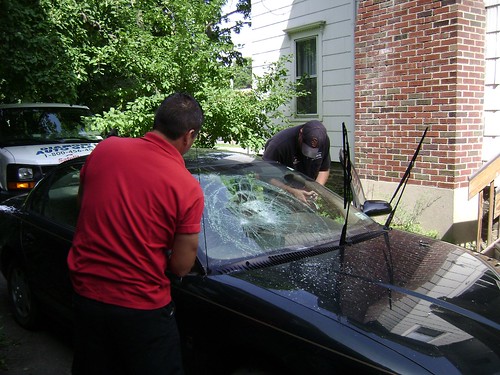 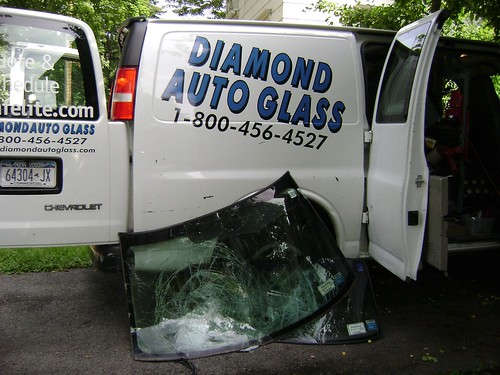 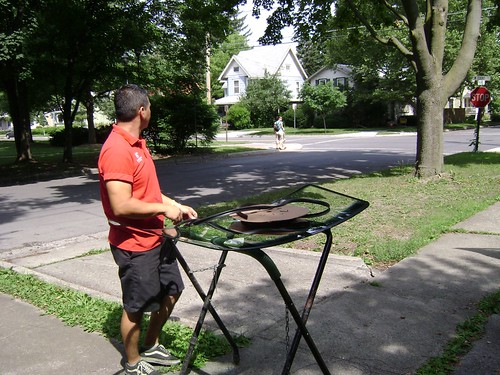 My new glass, which is bigger, curvier, and more expensive: 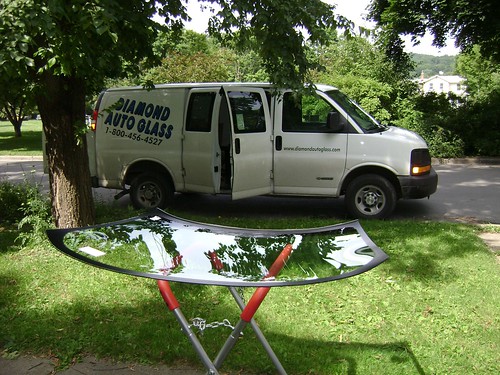 The new glass is stuck on with some glue: 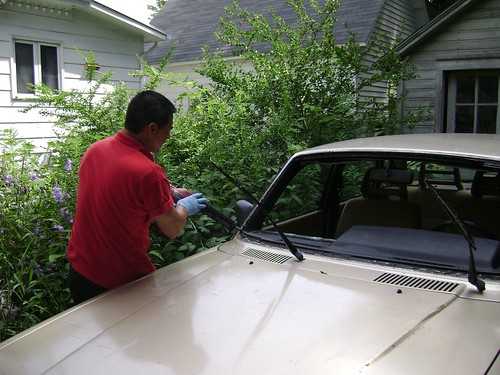 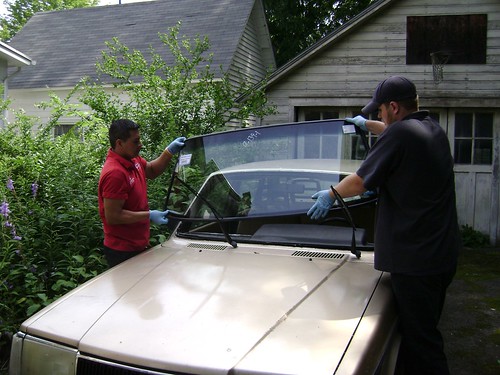 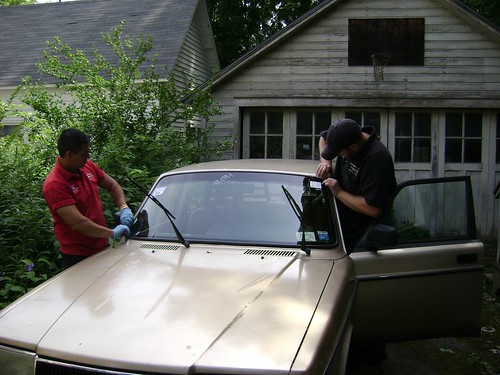 Here you can see Calvin holding the giant glue gun in his left hand: 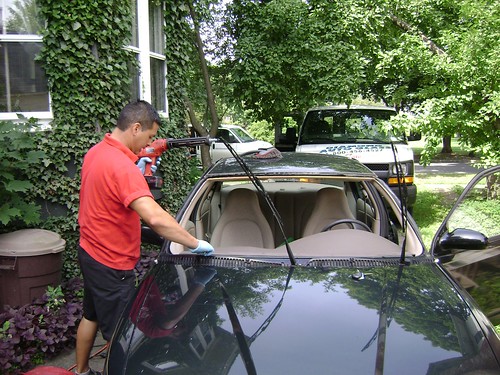 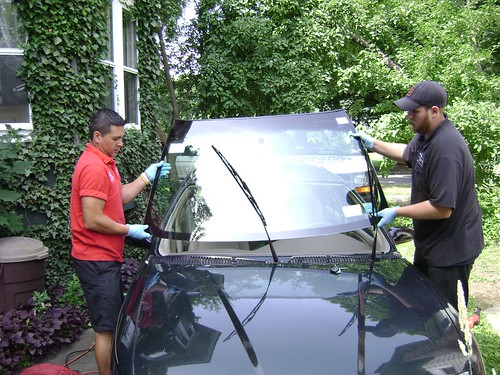 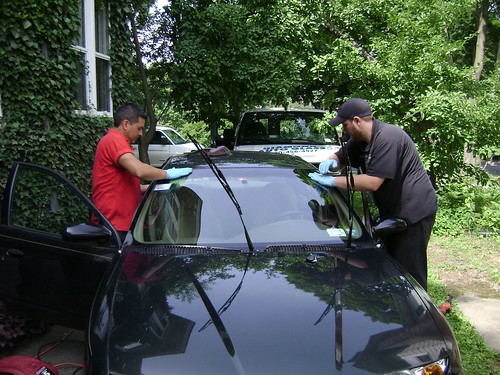 They even vacuumed up all the bits of broken glass, both outside and inside the car: 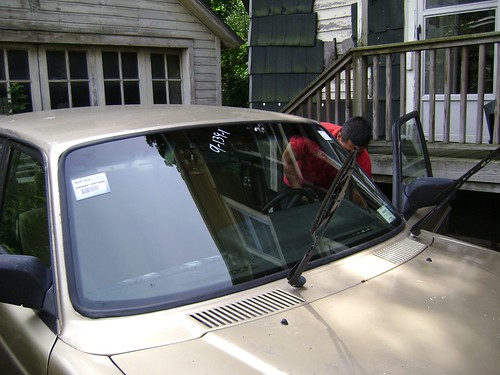 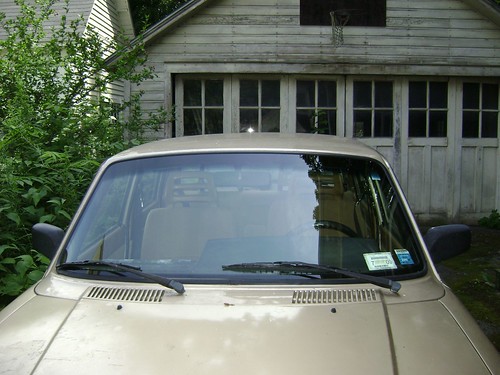 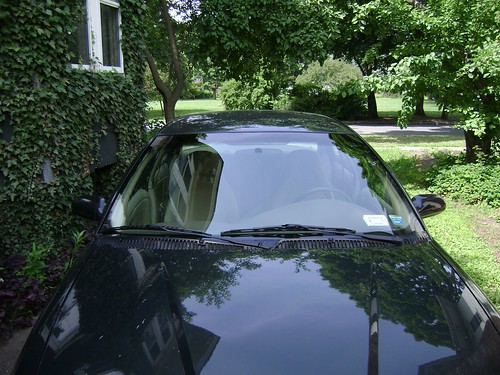 All in all, the windshield replacement was far less painful than I had thought it would be. Except in my wallet. The replacement wasn't covered by the deductible, so I'm out of pocket $300+.

Alex told me that they had also fixed the glass of another car a couple blocks up the street. Someone seems to be going around the neighborhood smashing car windows. Here's hoping they don't come back.

After having used a French press to make coffee for eighteen months or so, I realized that I wasn't using my more than a decade-old drip coffee maker. It was just taking up counter space I could use to more productive ends, so I retired it. In the process, I discovered that the glass pot was cracked, so the coffee maker was useless regardless. That makes one less coffee-making apparatus I maintain. Aside from the French press, however, I still have:

Taking stock, I'm rather amazed that I never actually purchased any of this equipment, including the broken machine. All of the caffeine paraphernalia was given to me.

I've decided that I quite like The Killers' latest album Day & Age. They've shaved off their facial hair (most of them, anyway) and returned to the pop sound of their first album Hot Fuss. Here's the video of first single "Human", which contains a most supremely silly lyric, from a band that takes its silly lyrics far too seriously.

In the short time that I've had it up (less than a week) on Flickr, the photo of the roller girl with the broken leg has shot up to the second most viewed image in my photostream with more than 100 views as of today. No, I'm not linking to it here; I don't want to drive up its views even further.

My all time most-viewed photo is this one. Apparently, the Yahoo! image search thinks it's a good example of a coffee shop.

Last night was roller derby time, once again, as the Ithaca SufferJets took on the Asylum City Lunatics from Utica, NY. 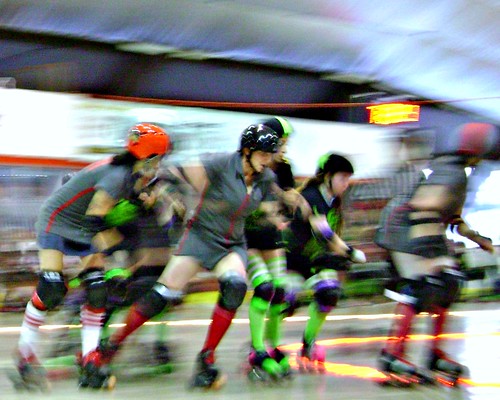 Utica jammer can't get past the Ithaca blockers.

Walking on campus yesterday, I was startled by a hawk swooping down some distance in front of me. It was too far away for me to see if it had caught anything. But, apparently deciding its perch was too exposed, it decided to transfer to a building ledge. Its path took it just a few feet over my head, and I saw what it had in its talons: a squirrel. 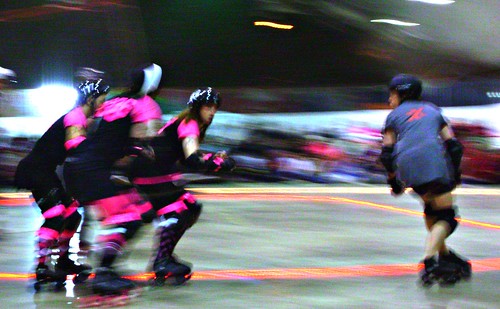 An Ithaca SufferJet keeps a wary eye on the Syracuse Psycho Dolls.

Video and highlights after the break. ( Collapse )

Presented for your amazement:


MUTO a wall-painted animation by BLU from blu on Vimeo. 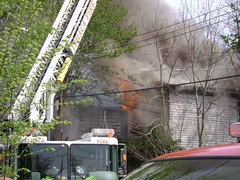 The Ithaca Journal article doesn't have much more to say about the fire yesterday; the cause is still undetermined. I am somewhat bemused that my neighborhood is called "historical".

My upstairs neighbor, who had a very good view of the initial stages of the fire, said that he saw a window blow out. This was apparently the explosion I heard. The house itself is gutted and uninhabitable. Damage to neighboring houses appears to be limited to the vinyl siding to one house. 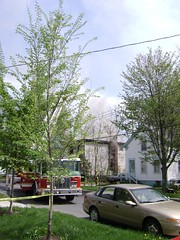 It appears that the white house on the other side was undamaged. I'm sure they'll have problems with smoke, though, since a little smoke reached into my apartment.

I should mention the rather belligerent young gentleman, girlfriend in tow, who came scurrying up the street. He seemed rather upset that a crowd had gathered to watch his house burn down. At least, he claimed it was his house although he didn't look like his name would be "Vu A. Do"; I guess he might have been renting. He kept trying to approach the burning building, despite the efforts of Ithaca's Finest to keep him back. A witness claims that he was eventually led away in handcuffs, although I did not see that myself.

Sunday afternoon. I'm settling down to watch the Yankees-Indians game. I hear sirens, which is normal since the main firehouse is just a few blocks away. Then there's a explosion from the back. I look out the back window to see this: 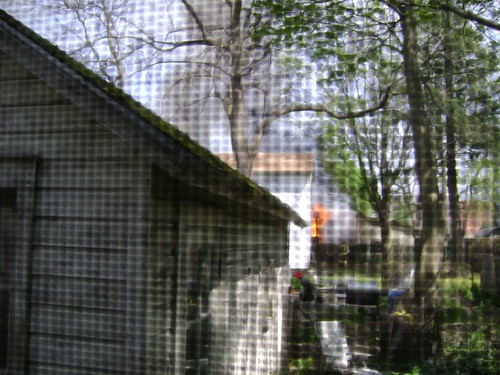 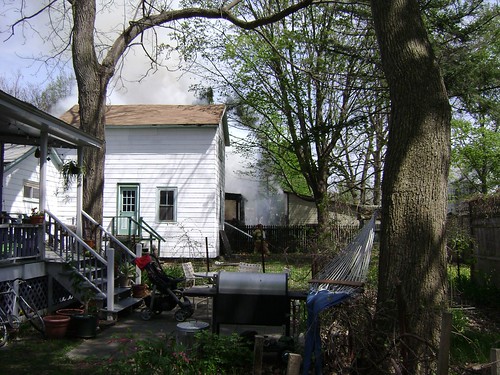 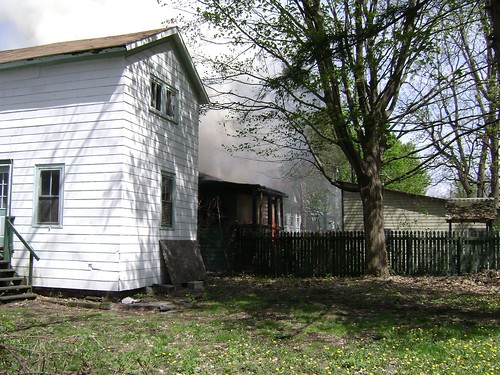 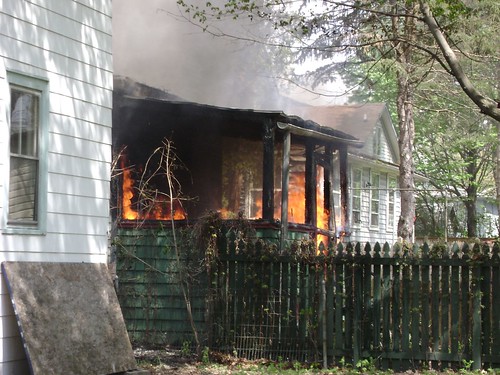